Mr Somaiah Aroori is a vastly experienced consultant general, laparoscopic, hepato-pancreato-biliary and transplant surgeon based in Plymouth. He is a specialist in laparoscopic surgical procedures involving the gallbladder, bile duct, liver, pancreas, duodenum, hernias in the groin, umbilicus, adrenal glands and kidneys. He chooses laparoscopic surgery due to it being less invasive, associated with less pain, offering faster recovery, and lower infection rates.

He completed his medical qualifications in his native India, achieving bachelors degrees in both medicine and surgery before gaining a masters in general surgery from the best medical institution in India, The All India Institute of Medical Sciences, New Delhi. Mr Aroori then moved to the UK and trained in general surgery, hepatobiliary and pancreatic surgery in Birmingham and Cambridge.

In 2011, Mr Aroori started his general, HPB , and renal transplant surgical consultant job at University Hospitals Plymouth NHS Trust. Since then he has been involved in over 1000 laparoscopic gallbladder operations (with no bile duct injuries) 600 hernia operations, 600 complex liver, pancreas, and bile duct operations for tumours, and several hundred other general surgical operations.

Mr Aroori is an active contributor in numerous research projects and medical investigations. He is the chief investigator for the multi-centre study called " RAW - Recurrence After Whipple" study and UK wide study called the ALICE study. He is an examiner for both MRCS and FRCS. He has developed and organised several surgically courses both for the postgraduate and consultant surgeons. He is honorary fellow of Plymouth University. He also tutored undergraduate and postgraduate medical students on a range of courses as well as regularly writing and contributing to numerous medical publications. 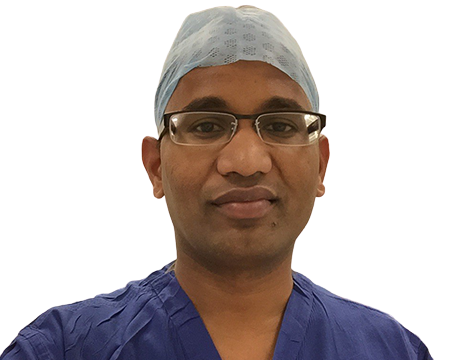 What is liver surgery? The liver is the organ that is responsible for: &l...

Although Mr Aroori was delayed in surgery, he still spent the time to run through the diagnosis and next steps in the treatment without rushing, even at the end of a long day.

Well detailed step by step explanation of treatment plan by the doctor in a relaxed manner.

I found Mr. Aroori most helpful. He explained clearly what My treatment would involve and the range of possible outcomes. I look forward to receiving treatment in the near future without hesitation.

I was extremely anxious about having surgery and was given an additional consultation to discuss my concerns. Mr Aroori showed exemplary patience, understanding, knowledge, and expertise. He put my mind at ease and the cholecystectomy was a great success.

I found the whole service very good and would recommend it

Everyone is so friendly, couldn’t fault anyone! Mr. Aroori made me feel very at ease!

The consultation was on time, informative and has moved my treatment on to the next stage.

Mr Aroori is encouraging, articulate, reassuring and courteous. He is willing to explain procedures clearly and draw diagrams if necessary. I have no hesitation in recommending him as a kind and skilful professional.

Mr Aroori has looked after me extremely well. He transplanted a kidney with great results and he has operated on my large hernia. His skill attitude and attention have been first class . I cannot explain in words how impressed I am and highly recommend .

I have only thanks and respect for you and your team. From the moment of first contact to the outcome consultation everything proceeded with the greatest proficiency, profesionalism and kindness. Thank you.

Very good appointment. Mr Aroori took time to explain everything and I did not feel rushed. It was good to be able to tell him, how I felt, face to face rather than over the phone.

Very professional and explained my procedure to me very well

The doctor was very friendly, reassuring, precise and concise, gave me all the information I needed and was very approachable

Amazing service from start to finish, every member of the team was polite friendly and did the best they could for me

Great consultant, explains everything well and has been very helpful

Mr. Aroori didn’t have a clinic until the following week but he saw me… next day! His explanation of my condition and treatment options was thorough and aided by diagrams which helped explain complex procedures. The whole experience engendered confidence.

Mr Aroori is very pleasant and reassuring. So far, I have been very happy with my experience.

Dr Aroori explained what the procedure involved, his surgical skills are exemplary, excellent post op consultation. I am very happy with the result, and would have no hesitation in recommending him to family and friends.

Mr Aroori was superb. He helped my frail elderly mother, listening carefully, diagnosing quickly, going above and beyond to complete her treatment ASAP and taking account of her needs and wishes. I would not hesitate to recommend him: he is excellent.

Good to improve patient's health pre op, good to have detailed chat about op beforehand. I therefore went into theatre in a positive state of mind, sure this has helped a speedy recovery. Thank you Mr Aroori and your team for your dedication and work.

Any cookies that may not be particularly necessary for the website to function and is used specifically to collect user personal data via analytics, ads, other embedded contents are termed as non-necessary cookies. It is mandatory to procure user consent prior to running these cookies on your website.